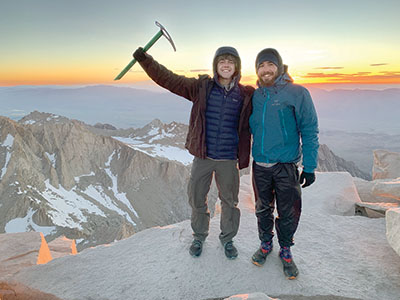 Jackson Stacy and Blake Marsh atop Mount Whitney, the highest point in the Lower 48 states.

Jackson Stacy and Blake Marsh, both 22, have been best friends since preschool. They were on the soccer and cross country teams at Waccamaw High School before graduating in 2015.

Stacy’s trail name was given because of his insistence on carrying an entire roll of toilet paper in his backpack, no matter the size or weight. Marsh is a huge fan of the movie “The Lion King” and Simba was already taken.

Trail names are given by others, not chosen by the individual hikers.

“By the end of the trail, we made a lot of really good friends, who I don’t know what their real names are,” Stacy said.

The Pacific Crest Trail is the western equivalent to the Appalachian Trail, although 400 miles longer. It stretches from the Mexican border through California, Oregon and Washington to the Canadian border.

Stacy and Marsh hiked part of the trail while working as camp counselors in California during the summer before their sophomore year in college. Stacy was a student at Vanderbilt University and Marsh was at Winthrop University.

Stacy thought the idea of hiking PCT was pretty cool, but thought he would have to wait until he was older to do it.

During his junior year at Vanderbilt, he started making his plans to hike PCT, and started dropping hints for Marsh.

“I was tired of school and tired of sort of just following the standard path. It felt like everything in my life had been lined up for me,” Stacy said. “Something like a through hike only happens if you make it happen. So I decided I wanted to make it happen.”

Marsh thought it was time for him to be a grownup and get a job when he graduated from Winthrop. Then he realized he didn’t have a plan. “It was kind of a backup and also ‘why not do it,’” Marsh said. “He’s my best friend and it would be a cool adventure in this perfect season of life before you start a full-time job.”

After their hiking permits were approved in late 2018, Stacy and Marsh started researching what gear to buy, how many miles to hike every day, what food would best fuel their bodies, and when and where to stop for breaks and to spend the night.

On May 13, within days of their graduations, Stacy and Marsh stepped on the southern end of the PCT.

“The first week on trail was kind of miserable for both of us,” Stacy said. “I remember having multiple conversations that even if the next four or five months is nothing but this, we’re not quitting because we don’t quit. But this is going to suck. I hope it’s not like this.”

“We were both on the same page,” Marsh said. “We’re not quitting.”

The duo fell into a routine of hiking separately, only reuniting to eat lunch together and when stopping for the day. Both spent their days listening to audio books or podcasts.

Some days they would encounter 15 to 20 people, other days it would just be a handful. Two days before finishing, Stacy and Marsh ran into an Israeli man who they had met during their first day on PCT.

“It was kind of like seeing an old friend, though you barely know each other,” Marsh said.

The duo relied on the Pacific Crest Trail app, which Stacy said is a combination of Google and Yelp when deciding where to stop to eat and/or stay over. It works without internet and uses GPS to show hikers what things are nearby, like water sources or towns.

They also carried GPS devices that could be activated in an emergency.

“No matter where we were we could always hit a button that would text our moms and say ‘I’m OK, things are going well,’” Stacy said. “There’s also an SOS feature where you can basically call for a helicopter if you broke your leg or got bit by a snake anywhere on the trail.”

For trail snacks, Marsh’s go-to food was chocolate, Stacy’s was trail mix. For dinner, both favored a “Ramen bomb,” a mixture of Ramen noodles and instant mashed potatoes, sometimes with olive oil, cheese or fried pork skins mixed in.

By the end of the endeavor, Marsh said they were both running on reserves.

“We were kind of shot, our bodies were just destroyed,” Marsh added. “It was kind of like the adrenaline. I’ve already made it this far, I don’t care what my body is telling me, I’m going to make it.”

“Most of the time, it was really hard. You were really tired and you were in physical pain and discomfort,” Stacy said. “I tell people it was a lot like normal life. There’s really good days and there’s really bad days. It was just that the good one tended to by really, really good. You’re literally on the top of a mountain seeing some of the most beautiful spots in the country. On the bad days, [you] are freezing and wet and miserable.”

After 128 days, Stacy and Marsh returned home Sept. 22. They are now on a list of more than 7,000 people who have hiked PCT. Ninety-four people have done it more than once.

Marsh is looking for a job in the health care field.

Both said the fact that they hiked PCT after college but before they started jobs has helped them avoid “post trail depression.”

“I think it would be much more difficult to leave, go on the trail, and come back to the same job,” Stacy said. ‘You’ve changed, but nothing around you seems to have changed, and you’re back in this old routine. I think that would be really challenging.”

“I was expecting to feel down just a little bit because you’re coming back from this huge, amazing adventure, seeing amazing things, meeting amazing people,” Marsh said. “A lot of people ‘find themselves’ on the trail, find a purpose within accomplishing a real cool journey. My purpose isn’t in hiking or going on adventures. My purpose is in Christ. It was a spiritual journey, and getting back here is just another journey … at home, with your family [and] getting a job.”