With all that sand, a few gaps stand out – Coastal Observer

With all that sand, a few gaps stand out 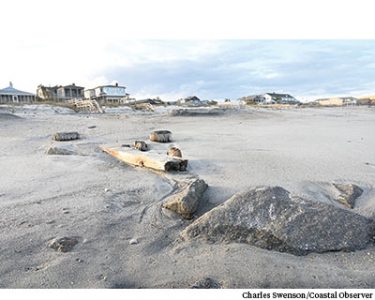 Part of a groin remains exposed below the renourished beach in the middle of Pawleys Island.

Pawleys Island’s beach renourishment project could end as early as next week, weather permitting. The 1.1 million cubic yards of offshore sand won’t cover all the rock groins on the island’s beachfront, which has raised concerns among property owners and town officials.

The project that began in October has about 100,000 cubic yards of sand to move, Administrator Ryan Fabbri said. Most of the sand went on the island’s narrow south end, where there was no dune and the ocean washed under houses during storms or extreme high tides.

“We were really surprised we didn’t get any more sand,” Carol Avinger, who owns a house in the middle of the island, told Town Council this week. “It’s just real disappointing.”

Her husband Norman pointed out that the sand doesn’t cover the seaward end of the groins, but they are covered by water at high tide.

“I think we’ll have some accidents out there, maybe some broken necks,” Norman Avinger said. “I worry about my grandkids.”

Mayor Brian Henry, who owns the Sea View Inn to the north of the Avinger house, said he noticed the same thing.

“I’m not going to say I’m disappointed,” Henry said. “We do have a potential hazard.”

Because there is a healthy dune in the middle and north end of the island, the project design doesn’t call for as much sand in those areas, Fabbri said. That’s also the reason the project is moving faster as it nears completion.

In places, the groins are under 4 feet of sand. “The groins are going to start to reemerge. In six months, they’ll all emerge,” Fabbri said.

He had discussed options with Coastal Science and Engineering, which designed the project. One solution is to erect signs.

“We don’t want to litter the beach with groin signs,” Fabbri added.

“If it’s your property, you might know where it is, but a visitor may not know,” Council Member Guerry Green said.

The latest the work will wrap up is the end of March, Fabbri added.

The contractor, Marinex Construction, is due to move the last of its equipment from the county-owned parking lot on the south end by March 24. That will allow the county to replace the timbers that mark the parking spaces.

“I still think that is a good date,” Fabbri said.

But he cautioned the council that it may not be possible for Marinex to pump sand as far north as Third Street, as proposed.

In the original plan, the work stopped just north of Pawleys Pier. After hearing requests from north end property owners, that was extended.

“The job was bid only to a couple of hundred feet north of the pier,” Fabbri said. “The plan is to go to Third Street, but it all depends on the ability of the equipment to handle it.”

The dredge is 3 miles off the south end and as work moves north it is nearing the limit of its pumping capacity.

The sand pumped onto the beach has created a wider beach at high tide, but the sand will shift with the current to both ends of the island.

No sand was placed in front of the south end parking lot. Now, Fabbri said, “there’s tons of sand.”