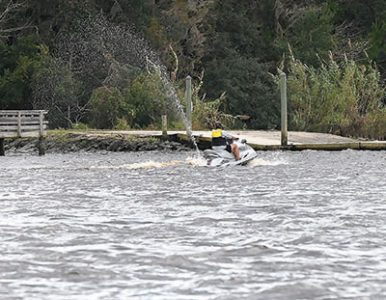 A jet ski pulls up to Hagley Landing, site of a monitoring station for the Waccamaw River.

Till Hanebuth heard the complaints. Flooding had gotten worse, not only during storms but on sunny days. And it had become more apparent in the last five years.

“I was not really sure what to believe,” he said.

But Hanebuth, an associate professor at Coastal Carolina University with a doctorate in geology, had the means to find out.

The increase at Winyah Bay is higher than the rise in Charleston harbor of 15.3 inches over the same period.

The increase at Hagley is higher than the 3 inch global rise in the sea level.

“The question is: Why is that?” Hanebuth said. He hopes that local government will fund a study through the university’s Coastal Geosystems Research Lab, which he heads.

The answer doesn’t lie in the water alone, Hanebuth said, but on the land, which is sinking through a process known as subsidence.

Hanebuth met last month with members of Keep It Green, a citizens group that formed last year to oppose redevelopment of the Litchfield Racquet Club and has remained engaged in land-use issues. Members cited the data on water level rise to argue against the proposed rezoning of property on Petigru Drive to allow construction of 182 apartments.

“The water level rise in Georgetown County is five times faster than the global rise and our levels are significantly higher than Charleston or Wilmington, 50 percent higher than Charleston, and Charleston is a drowning city,” Cindy Person, a leader of Keep It Green, told the Planning Commission at a rezoning hearing. “This problem is beyond the expertise of our county.”

She agreed more research is needed, but told the commission “until we have some real answers, the only responsible thing to do is to stop approving unnecessary high-density development.”

Development has an impact, but it is just one of several factors in rising waters, Hanebuth said. The one he wants to focus on is subsidence.

“Our land is sinking. We have no real numbers on that,” he said. “There are different components why land can sink.”

Subsidence is a natural process. In the Charleston area, the land is sinking an average of 5 inches every century, according to the S.C. Sea Grant.

But there is also a human component, Hanebuth said. In some places half the subsidence has been attributed to pulling water from the ground for public and private use.

In Georgetown County, “it’s not very much,” said Ray Gagnon, executive director of the Georgetown County Water and Sewer District. He serves on the groundwater technical advisory committee for the state water plan.

The utility uses the aquifer to provide water to customers in the western part of Georgetown County. On the Waccamaw Neck, it draws water from the Waccamaw River. During the winter, the district stores water in the aquifer that it uses to help meet peak demand in the summer.

The district is only allowed to withdraw 80 percent of what it puts into the aquifer, Gagnon said. That prevents saltwater intrusion.

“The problem we have with groundwater here is that it doesn’t recharge very quickly,” he said.

Other factors in land subsidence include the loss of wetlands, Hanebuth said.

“The first number we want to generate is how much of the wetlands got lost of the past 25 years,” he said, referring to the water level rise at Hagley. “It’s a very easy equation.”

Hanebuth has been at work in Georgetown County for the last two years studying the silting of the harbor in Georgetown. The county is continuing to fund that work to find a way to reconfigure the channel.

His first look at the long-term impact of sea level rise came when he found five years of handwritten data from the Georgetown lighthouse. It was compiled in the early 1900s when the jetties were built at the entrance to the bay. “That was amazing,” Hanebuth said.

He installed sensors to record contemporary water levels. He compared that with data from a site in North Inlet at the National Estuarine Research Reserve. “You can clearly see the water level’s rising,” Hanebuth said. “This data is robust.”

He then looked at U.S. Geological Survey data from Hagley Landing. While the data is for the Waccamaw River, Hanebuth said he would expect to see the same level of rise on the Pee Dee River, which is less than 2 miles to the west.

The 15-inch rise over 22 years is “quite a number for a low land without a gradient,” he said.

Determining how much of the rise comes from sinking land, increased rainfall due to a warming climate and from the rising ocean would help the county create “smart and sustainable solutions against flooding,” Hanebuth said. “How can you come up with good planning if you don’t know how fast things are changing?”