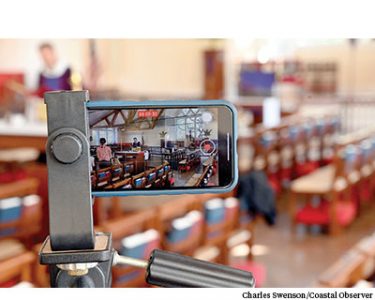 Local pastors are working hard to make sure that social distancing doesn’t include spiritual distancing.

With a ban on gatherings of more than 10 people in place due to the coronavirus, churches have started either live streaming Sunday services, or posting pre-recorded videos of services and sermons.

The Rev. Don Williams of Pawleys Island Community Church brought together a group of about 15 volunteers and band members last week to record Sunday’s service. Although the church has been live streaming services for about a year, Williams said it was “weird” to see such a small group in a sanctuary that seats 850.

“We’re trying to keep it as normal as possible,” Williams said. “It’s a little different [but] it seemed to work.”

Father Wil Keith of Holy Cross-Faith Memorial Church had an even smaller group when he recorded his Sunday sermon on Saturday morning. Keith was joined in the sanctuary by his wife and children. Keith chose 9 a.m. so the lighting would be similar to a regular service.

“We’re keeping things familiar and consistent in times like this,” Keith said.

Church members took videos of themselves reciting scripture at home and those recordings got spliced together with Keith’s to form the finished product for Sunday.

The Rev. Will Malambri of Belin Memorial United Methodist Church said providing online services has had a “huge learning curve” for him and Belin’s two other pastors, the Rev. Walter Cantwell and the Rev. Isaac Dusenberry.

All three participated in live chat sessions on Facebook and YouTube on Sunday while the prerecorded service was being shown.

“They really seemed to connect with the other people and with the pastors,” Malambri said. “It felt like they weren’t watching something passively, but that they were part of something pretty intimate given that there were screens dividing us.”

Two church members who had been homebound with illness for awhile said they feel more connected to the church than they had in a long time, Malambri added.

Malambri and Keith have both been calling all of their church members to check in and stay connected.

“The clergy are working very, very hard to maintain the connection where our main point of connection, the sanctuary, is taken away at this time,” Keith said. “It’s very tiring, but good to hear from anybody. I’m thankful [because] they’ve kept me positive as much as the other way around.”

Some of the smaller worship groups at the community church have started meeting online.

“It’s really causing us to look at some virtual things,” Williams said. “It’s not anything we’ve done before, but it’s working. It allows people to stay connected in the best way they can.”

Malambri is posting daily devotionals on the church’s website and giving people a daily task such as playing a board game, reading a book to someone of a different age, or posting a picture of a pet.

“It’s ways to try and encourage social contact,” Malambri said. “So we all have a common purpose that day.”

Keith, Malambri and Williams are also encouraging their church members to stay in touch with each other.

Williams is not sure when his congregation will start meeting inside the church again. He’s even exploring options for Easter Sunday on April 12.

“We’re trying our best to try and be creative with social distancing. We’re making sure we don’t have any spiritual distancing,” Williams said. “Just because people can’t go to church doesn’t mean we can’t be the church.”

In some ways, Keith feels like his church has been taken away from him.

“I’m still gardening, but I feel like my trowel has been taken away and I’m having to do it with my hands right now,” he said. “It takes longer and it’s harder work. But there’s a blessing in that too. That soil, those people, are touching me directly during this time. So I’m thankful for that.”