Animation provides a test drive of proposed changes to Highway 17 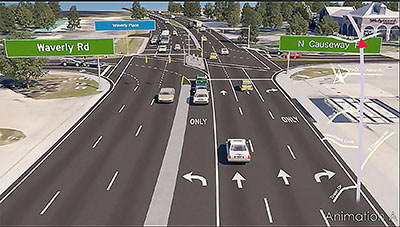 An animation shows how traffic will flow through the redesigned intersections.

A proposed redesign of the main intersection in the Pawleys Island business district will replace left turns with U-turns as a way to reduce accidents and keep traffic moving. The new look for the Waverly Road / North Causeway intersection is contained in a study of the Highway 17 corridor on Waccamaw Neck that started last year.

The draft of the study also proposes three new traffic signals, closing 12 median cuts, adding three roundabouts on side streets and the extension of the raised median along Highway 17 in the Pawleys Island area. It is an update to a 2003 study that has guided land-use regulations and led to the construction of the raised median in the Pawleys business district. Like the earlier study, the update includes a recommendation for expanding the highway from four to six lanes.

But the new proposals come with animated renderings that show what the new features will look like. They can be viewed at gsats.org.

“It will give you a feel for the corridor and where you are along the corridor,” said Mark Hoeweler, executive director of the Grand Strand Area Transportation Study, which is funding the $100,000 corridor study.

A draft of the update by AECOM, a global engineering firm with an office in Columbia, is up for review by a local officials and residents who comprise a steering committee. The study will also be presented to the public.

“We’d like to do something in person,” Hoeweler said. “That’s our goal. I don’t know how we’re going to do that.”

An early draft of the update was completed in the spring just as public meetings were restricted by the coronavirus pandemic. Hoeweler wants to make sure that the public meeting is held somewhere in the study area, although the county has offered the use of the Howard Center in Georgetown.

In the meantime, the public can tour two sections of the corridor though an animated flyover and send in comments by email.

The tour starts at the South Causeway, where a raised median was first proposed in 2003 to replace the two-way left-turn lane. Heading north, the rendering shows median cuts  to allow left turns at Beaumont Drive, Bromley Place and Pawleys Island Presbyterian Church. There is also a cut at the Tidelands Health office that allows U-turns.

At the Blue Stem Drive and Player Road intersection, a traffic signal proposed in the original update was eliminated. There are left-turn cuts from the highway. To head north from Blue Stem requires driving south and making a U-turn. To head south from Player requires driving north to make a U-turn.

The flyover also shows Bypass 17 from Wachesaw Road to Highway 707. There will be six lanes of traffic from Bellamy Avenue to 707. A traffic signal in the northbound lane at Courtfield Drive creates breaks for U-turns for southbound traffic.

The flyover animation allows viewers to post comments on the video.

Once the steering committee has reviewed the draft proposals, Hoeweler said he will set up a public meeting.

“We really want to do it within the boundary of the corridor,” he said. “We’ve come this far, we don’t want to have it come to a big thud at the end.”

There is no timetable for actual construction. That will hinge on funding. The renderings are labeled 2040.

While the buildings shown are the ones in place today, the renderings take one guess about what the future will bring. The price of unleaded gas is shown as $2.42 a gallon.