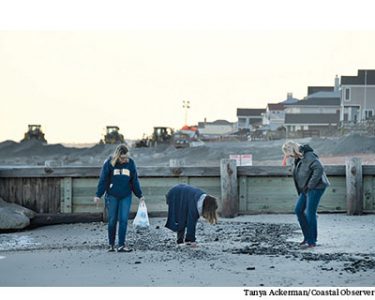 Construction crews expect to move out of the south end parking lot on Pawleys Island next week. It is uncertain when visitors be able to move in to the popular beach access that has been closed since September.

“The public’s getting antsy, and I don’t blame them,” Administrator Ryan Fabbri said.

Marinex Construction has started work in October to place 1.1 million cubic yards of offshore sand on 3.1 miles of beach, starting at the south end.

The parking lot, with 80 spaces, is owned by Georgetown County. It was washed over by the storm surge from Hurricane Dorian in September. Afterward, it was used to store sand removed from Springs Avenue by the Department of Transportation before Marinex started staging for the renourishment project.

With work completed on the southern end of the island, Marinex plans to move its equipment north along with the pipeline from the dredge offshore.

Fabbri said he started working with the county two months ago to get the parking lot reopened.

“We’re the ones that absorb all the complaints,” he told Town Council this week. “We have very limited say in how it gets put back together.”

Beth Goodale, the county Parks and Recreation director, said she is working with the county’s capital projects director, James Coley, on a new walkway from the parking lot to the renourished beach.

“It’s a fairly substantial dune that we didn’t know would be that high,” Goodale said. “It’s a big, big, big change. We were kind of surprised when we went out there.”

The old walkway is partly buried by new sand. It will be removed by Marinex, Fabbri said.

The county is considering a structure that complies with the Americans with Disabilities Act.

“That will have to be engineered to some degree,” Goodale said.

The parking spaces will also have to be laid out and railroad ties installed to mark them.

When it created the new dune, Marinex moved it 30 feet seaward of the previous dune in front of the parking lot. That won’t create more parking spaces, but it will provide more room for vehicles to maneuver in the lot, Fabbri said.

He has urged the county to use roll out mats to improve the footing on an emergency vehicle access at the south end of the parking and wait to rebuild the walkway. “I think that’s a good solution for the next year or so,” he said.

Goodale said that could be a problem because there is an undeveloped lot south of the parking area. But Fabbri pointed out that private lot is on the public beach.

There is no date for the county to complete work and reopen the access. “Hopefully by the spring beach season,” Goodale said.