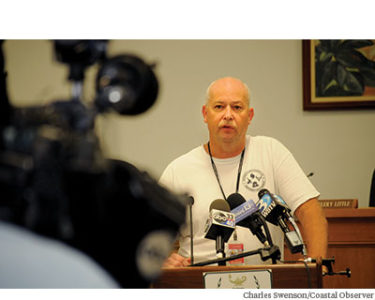 Sam Hodge at a press briefing before Hurricane Matthew in 2016.

Sam Hodge, the face of Georgetown County during hurricanes, flooding and other disasters, is retiring at the end of August.

“The time has come for me to close this chapter,” Hodge said Wednesday. “After serving the residents and visitors of Georgetown County for nearly three decades, I just hope and pray that I have made a difference in someone’s life and made Georgetown County a safer place and better prepared.”

A native of Socastee, Hodge has been director of Georgetown County Emergency Management since 2007.

“Sam will be greatly missed. He has been an invaluable asset for Georgetown County,” County Administrator Sel Hemingway said. “The experience he has brought to the county and the institutional knowledge he has will be extremely difficult to replace. While I selfishly wish that he was remaining with the county, I certainly understand his position in life and wish him well in retirement and any future endeavors.”

“Georgetown County has allowed me to grow professionally and work with some of the best people I have ever known,” Hodge said. “It afforded me the opportunity to take over an Emergency Management program and rebuild it – with the support of the county administrator and County Council – to one of the best programs in the state. I will always be grateful for the trust and support that was given to me, and for the privilege of helping my community and its residents when it matters most.”

Hodge guided the county through five federally declared disasters since 2014.

Hodge graduated from Socastee High School in 1984 and the paramedic program at Horry-Georgetown Technical College in 1990.

He was already working as a firefighter for the Murrells-Inlet Garden City Fire Department in 1989 when Hurricane Hugo hit. He and the other firefighters rode out the storm at Socastee High and had to cut pine trees and clear them from Route 707 to get back to the station.

In 2014, the 25th anniversary of the storm, Hodge recalled how dark and quiet neighborhoods were after the storm.

“That was an eerie feeling,” he said. The fire station was powered by one small Honda generator for 45 days.

A few weeks after Hugo, Hodge married his fiancée Tonya.

Hodge continued to work for the Murrells-Inlet Garden City department until joining Midway Fire and Rescue in October of 1990. He rose to the rank of battalion chief before leaving to join the county’s emergency management department in October of 2007.