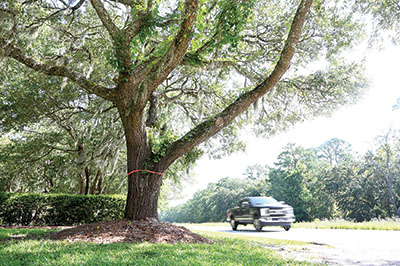 DOT agreed to save this oak at an entrance to Arcadia Plantation after being contacted by the owners.

A project to widen the shoulders of Highway 17 between Prince George and the Waccamaw River bridge is under review after property owners along the route raised objections to the state Department of Transportation’s plan to cut down trees in the right of way.

The $5 million project will add 2 feet to the shoulders along 7.4 miles of highway. DOT initially proposed to cut the trees back 38 feet from the east side of the highway and 24 feet from the west side. It also planned to cut down trees in the median, including oaks planted in 2004 with a state highway beautification grant.

Matt Balding, an owner of Arcadia Plantation, learned about the project when he saw heavy equipment moving down Highway 17 from Prince George. He maintains a fire line along both sides of the highway.

He started making phone calls when the operators told him about the scope of the project.

“I understand you have to keep things up, but not why, when we went to all the trouble to preserve this corridor, they have to cut so far,” he said. “It makes no sense.”

Planning for the project began in 2018, according to DOT records. The bids were let this spring. The project is due for completion by June 30, 2021.

Balding said he received no notice about the project. Neither did Blanche Brown, manager of the DeBordieu Colony Community Association. The project would take out a stand of live oaks at the DeBordieu entrance.

“I think it was a well-meaning project,” Brown said, but she thinks the agency should have notified property owners.

The project originated at the DOT office in Columbia, Borque said.

“There have been several fatalities and accidents on that portion of the highway,” he said. “This was strictly through the state rural roads safety program.”

That means it didn’t come up for review by the Grand Strand Area Transportation Study’s policy committee, which approves DOT projects in the region.

“I’ve found nobody who thinks this is a good idea,” said state Sen. Stephen Goldfinch, who chairs the GSATS committee. “No local constituent of mine has said ‘I think we need to cut back the oak trees.’”

He and Brown have talked with Tony Cox, who represents the area on the DOT commission and serves as its chairman.

“I think I’ve got it resolved,” Goldfinch said. “We’re hoping DOT will fix it.”

Mark Hoeweler, the executive director of GSATS, was aware of the safety project, which is listed on the DOT website, but not its details. He thought the equipment that started work last week was there to improve the fire line.

Hoeweler understands the concept. The single largest cause of highway fatalities is the result of vehicles running off the road and hitting an object, “the majority of which are trees,” he said.

By widening the shoulders, DOT hopes to give drivers more time to recover if they drift out off the side of the highway.

“I can think of a couple of spots where, consistently, I see cars run off the road,” Hoeweler said of the highway between Pawleys Island and Georgetown. “Some of that stuff, in my mind, could be accomplished with guardrails.”

Brown said she still doesn’t understand why the clearing is 24 feet on one side of the highway and 38 feet on the other. “I never did get an answer,” she said.

Vida Miller, a former state representative, got a grant in 2004 that helped plant oak trees in the median at what is known as Bessinger Curve.

“Have you ever seen a tree that meets DOT criteria?” she asked.

While the safety project is needed, the clearing, she said, “is not conducive to our neighborhood.”