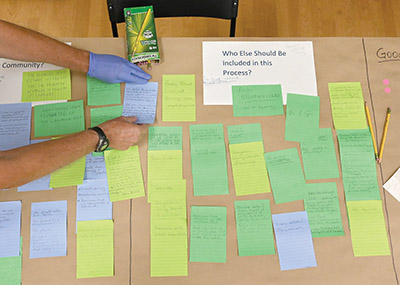 Comments from the public last fall led the planning staff to start over with its rewrite of the future land-use plan.

Three citizens groups say they are ready to go to court to force Georgetown County to complete an update of a state-mandated plan for infrastructure, growth and development.

“We need to have a plan for what our vision is for Georgetown County for the next 10 years,” said Amy Armstrong, general counsel and executive director of the S.C. Environmental Law Project. She is representing Keep It Green, Preserve Murrells Inlet and the local chapter of the League of Women Voters.

Armstrong told members of the county Planning Commission in a letter this week that the groups will ask the courts to order them to complete the 10-year update of the county’s comprehensive plan unless the commission establishes a timeline for the work by Sept. 17.

The comprehensive plan is required by state law, which assigns the task to local planning commissions. It must include 10 elements: population, economic development, natural resources, cultural resources, community facilities, housing, land use, transportation, priority investment and resiliency to natural disasters.

It is the land-use element that gets the most attention, since it forms the legal basis for zoning decisions. It is the one that the three groups singled out.

“Over the past two years, Keep It Green and other citizens groups have made considerable effort to work with county officials to ascertain the county’s strategy for updating the comprehensive land use plan and incorporating meaningful public input,” Cindy Person, who chairs the group, said in a statement. “Despite offering the county every opportunity, we have been frustrated by the county’s failure to follow through with mandatory obligations which are long overdue or to even provide a solid strategy.”

The land-use element was last updated in 2008. Under state law, all the elements of the comprehensive plan must be updated every 10 years and reviewed at least every five years.

“Preserve Murrells Inlet believes that the vast majority of residents and voters on the Waccamaw Neck want no more high-density housing development, small businesses rather than big box commercial, and protection of the environment and the remaining green spaces remaining along the Neck. These goals should be paramount and set out in the land use section,” said Leon Rice, president of the group.

Linda Cimadon, who leads the League of Women Voters chapter, said that without an updated plan “a moratorium on building is a reasonable consideration.”

The county planning staff started work in the fall of 2018 on an update to the comprehensive plan and contracted with Waccamaw Regional Council of Governments for help with the land-use and transportation elements.

Boyd Johnson, who was the county planning director at the time, said he had hoped to have results from two studies of the Highway 17 corridor to include in the update. Both of those were delayed. A final public meeting on a traffic study was held last month.

Holly Richardson, the current planning director, outlined a process last November to restart the process for the land-use element. It called for expanded public input, a re-write of the current plan by the Planning Commission after public workshops  and then a hearing by County Council. No timeline was established.

The staff has worked on the cultural resources and housing elements this spring.

Armstrong said she has been talking with the citizen groups about land planning issues for a couple of years.  She started looking at other elements of the comprehensive plan, including natural resources, which she had worked on in the past.

“I found it really disturbing that we don’t seem to have a cohesive plan for the county,” Armstrong said.

The elements weren’t even updated consistently, she said.

“It feels scary to think about where we are. Very little progress has been made,” Armstrong said. “The groups I’m representing feel like they’re at the end of their rope.”

Going to court isn’t her preferred option. Armstrong said she has met with County Council members and planning staff  to look for ways the public can help move the process forward.

“I’d rather not file a lawsuit. That would drag on forever,” Armstrong said.

Neither Richardson nor Elizabeth Krauss, who chairs the commission, could be reached for comment.