New plan for vacant tennis club looks like the old one 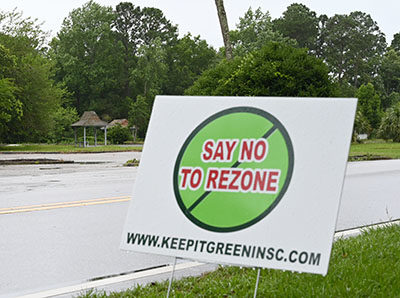 A sign opposing the redevelopment sits across from the former racquet club.

The new developer of the former Litchfield Racquet Club has submitted a plan for houses on the property that has changed little from the one the former developer withdrew last month.

The plan calls for 32 single-family homes on lots of 4,600 square feet. The 8.5 acres are part of a “planned development” and now the site of 17 clay tennis courts and a clubhouse.

“I was somewhat surprised,” Boyd Johnson, the county planning director, said. “I thought they were working on something different.”

The plan differs only in minor details from the one submitted to the county in May by Wimbledon Village LLC, whose principal was Trey Smith. That was Smith’s second plan for the property, which he had an option to buy from Founders Group.

Smith’s first plan showed 108 one-bedroom apartments. It was withdrawn before the Georgetown County Planning Commission could hold a hearing.

A “planned development” is a unique zoning district. Changes to the use, density or boundaries of the development have to be reviewed by the commission and approved by County Council.

The racquet club development was approved in 1987 for 25 duplex units along with the tennis courts, which date to the 1960s. Three single-family homes were built. There are 14 duplex units under construction by AmeriBuilt Homes of Myrtle Beach.

Smith submitted a plan for single-family development at the racquet club in May, but withdrew it a week later. RE1 Land Co. now has the option on the property. It is part of AmeriBuilt Homes.

The lot size is smaller than the minimum allowed in any other zoning district (5,000 square feet in “general resort residential”), he added.

The planning staff has not started its review of the plan, which will come before the Planning Commission in July. The staff recommended the county deny the multi-family project and recommended that a traffic study be done for development at the site because it will add to traffic at the intersection of Country Club Drive and Highway 17.

“Traffic is still an issue,” Johnson said. “What makes it so sensitive is that intersection.”

He expects that the recommendation for a traffic study prior to the commission acting on the request will be included in the staff report.

Property owners in Litchfield Country Club oppose the zoning change. Former members of the racquet club, which closed last year, have also been trying to buy the facility and reopen it for play.

Opponents have scheduled a meeting for June 22 at Waccamaw Library to prepare for the commission hearing. They are also gathering signatures on a petition asking that the property be preserved as recreational or green space under the original planned development.

“It’s a national issue,” Johnson said. He recently attended a workshop on the topic. “This was focused on making them into parks.

Georgetown County designates golf courses as recreational uses separate from adjoining residential areas. That was done “to make sure there was public input,” Johnson said.