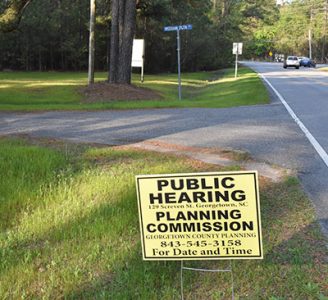 A rezoning will allow up to 90 multifamily units on Highway 701 near Wedgefield.

The location is different. It’s a 16-acre tract outside Georgetown.

The property is part of a 65-acre “planned development” that was created in 2008 as the future site for Georgetown Memorial Hospital. The hospital, part of Tidelands Health, wants to change the zoning to allow up to 90 multi-family units on the 16 acres.

Residents in nearby Wedgefield Plantation have raised concerns on social media. Phones started ringing at the Georgetown County planning department after the public notice of the rezoning went out last week, said Judy Blankenship, a senior planner.

The rezoning comes as county officials are looking for ways to encourage residential and commercial growth outside the Waccamaw Neck. A housing needs assessment prepared by Bowen National Research will be presented today to city and county officials and property developers.

The rezoning at the hospital property, formally known as the Weehaw Campus Planned Development, fits the criteria that the housing needs assessment found for development in the western part of the county.

The developer, Montana-based Blue Line Development, is proposing workforce housing that qualifies for federal tax credits. The same credits figured into a proposal for 185 multi-family units on county-owned property in Pawleys Island earlier this year, although only a small portion of those units would have met workforce housing threshold.

Blue Line is estimating rents will be about $975 a month, Blankenship said.

The average rent in that portion of the county is currently $1,194, according to the Bowen study. In that area just under 29 percent of renters pay more than 30 percent of their monthly income in rent. That is below the county-wide average of 45.6 percent.

The study noted that the figures for that part of the county were skewed because there were several high-priced rentals.

Overall, the study found, “there are very few market-rate apartments available with rents under $1,000.”

Public sector and service industry employees, “can only afford rental housing with rents of up to $994 per month,” according to the study. That would be within 30 percent of their monthly income. Above that level, they are considered “burdened.”

While the study found the greatest need is for rental units for lower-income people, who would pay up to $780 a month in rent, it noted that the middle-income group “appears to be a housing need and a development opportunity in the market.”

The study projects at gap between the supply of and demand for rentals of 670 units over the next five years.

It also shows a gap in houses for sale of 2,203 units, with 412 of those priced for low- and moderate income people.

The study cites areas such as the Highway 701 corridor north of Georgetown as ones worth considering for workforce housing.

The hospital developed plans for the Weehaw Campus after plans were approved in 2006 for a development on 5,216 acres along Highways 701 and 51.  Known as Crown Pointe, it called for over 7,700 homes and 1.75 million square feet of office and retail space.

The property was later sold to timber companies. A German firm based in Atlanta bought the last major parcels from the original developer in January.

The proposal for the hospital property would only change the text of the “planned development” district to allow multi-family house. A conceptual plan that showed the actual project would also require county approval, Blankenship said.

The Planning Commission will hold a hearing on the rezoning April 15. The developer has scheduled a meeting with Wedgefield residents on Monday.