Study scraps wider highway for all but one mile – Coastal Observer

Study scraps wider highway for all but one mile 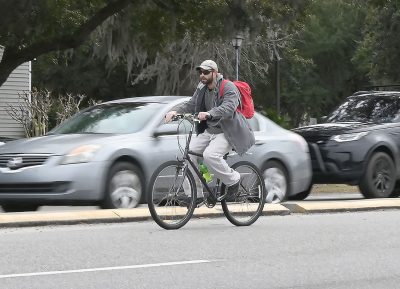 Joe Johnson cuts across Highway 17. There is concern that the study doesn’t do enough for cyclists and pedestrians.

The public will get a chance to comment on a package of $53.3 million in recommended improvements to Highway 17 before they go to Georgetown County Council for approval. Support from local government will make those projects eligible for federal transportation funds, although it won’t guarantee they get built over the next 20 years.

At the top of the list is a $4.2 million reconfiguration of the intersection of Bypass 17 and Highway 707 that was expanded as part of the widening of Highway 707 in 2019. The intersection will reach a failed level of service by 2022, according to the study.

The projects are included in an update to a 2003 study of the Highway 17 corridor on Waccamaw Neck that focused on ways to put off the day when the highway would have to be expanded from four to six lanes to handle growing traffic volume. The study was funded by the Grand Strand Area Transportation Study, an intergovernmental group that allocates federal funds for local projects. The most expensive item on the list is widening Bypass 17 to six lanes between Highway 707 and Bellamy Avenue. In today’s dollars, the estimated cost is $12.5 million. It is on the list of long-term projects for 2035 to 2040.

That is the only section of the highway proposed for widening. The study, by AECOM, a global engineering firm with an office in Columbia, says a 2003 recommendation for widening the highway in Pawleys Island and Litchfield can come off the list.

Not only would the right of way be too expensive, “widening the roadway is also linked to higher speeds and longer pedestrian crossings, which is counterproductive to safety and capacity for all road users as expressed from the public information meeting” held in September 2019, the study says.

Widening a mile of Bypass 17 “is an acknowledgment of the growth up there,” said Mark Hoeweler, the executive director of GSATS. “There’s not much more we can do in terms of mitigation in that portion of 17.”

But farther south, “it becomes cost-prohibitive,” he said.

Projects on Waccamaw Neck compete for funding with those in Horry County and other portions of Georgetown County. A widening project in the Pawleys Island area “would lose out on the cost-benefit analysis,” Hoeweler said.

Instead of a wider highway, AECOM proposes using a different design at several intersections. A “reduced conflict intersection” cuts the number of “conflict points” in half for vehicles by two thirds for pedestrians, according to the study.

At those intersections, traffic entering from a side street can only make a right turn. Vehicles then have the opportunity to make a U-turn at a designated location. In addition to being safer, the intersections improve traffic flow because there are fewer phases at the traffic signals and those phases are shorter, according to the study.

AECOM used a computer model to estimate how the improvements would affect travel along 12 miles of Highway 17 from the South Causeway to Highway 707. Today, the average travel time is 18 minutes and 38 seconds, including 8 minutes and 39 seconds of delay.

If no improvements are made, the growth in traffic volume over 20 years will extend that trip to 34 minutes and 16 seconds, including 11 minutes and 13 seconds of delay. The average speed will drop from 37 to 27 mph.

With the improvements, the model shows a trip time of 14 minutes in 2040 even with the increased traffic. The delays will be cut by half and the average speed will be 45 mph.

The study lists $2.5 million worth of projects to complete between now and 2025 that include closing median cuts and reconfiguring traffic signals. Reworking the intersection of Bypass 17 and Highway 707 leads the list for projects from 2025 through 2035. It is followed by a $4.6 million project to install a raised median between the North Causeway and South Causeway intersections and a reconfiguration of the Litchfield Drive and Country Club Drive intersections ($2.4 million).

County Council Member Steve Goggans pushed for funding of the update to the corridor study and for a companion study of land use. He said he was concerned that they don’t seem to be in sync.

“It seems like the group doing the actual corridor study has gone off the ranch,” he said.

Goggans was also concerned that the corridor study gave preference to moving traffic rather than pedestrians and cyclists.

John Sands, who served on the steering committee for both studies, said compatibility was a concern during the process.

“I had no reason to be outraged,” he said after seeing the corridor traffic study. “In both this and the land-use planning, I’ve come to the conclusion that if you pay smart people to give you their opinion you shouldn’t throw it back in their face.”

The county needs to decide which aspects of each study it wants to pursue, Sands said.

By approving the corridor study, the county will have the flexibility to seek funding for traffic projects. “There is really no downside to that,” Hoeweler said. “A project would have to be advanced by local government.”