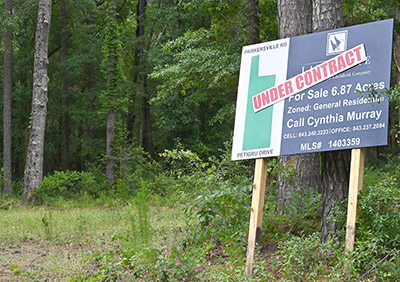 A tract on Petigru Drive is proposed to have 53 three-bedroom townhouses.

A citizens group is prepared to mount a legal challenge if Georgetown County approves two townhouse developments in the Parkersville community with a total of 109 units.

“If it’s approved as-is, I think I can safely say we would appeal it,” said Cindy Person, attorney for Keep It Green.

The Planning Commission will hold a hearing today on the plans submitted for two parcels owned by members of the Nesbit family. A 7.9-acre tract on Parkersville Road is proposed for 56 three-bedroom townhouses;  6.9 acres on Petigru Drive are proposed for 53 townhouses of the same size.

The county zoning ordinance requires the commission to review the plan for compliance with the land-use regulations. Its recommendation goes to County Council for final approval. The property is zoned “general residential,” which allows multi-family development provided it meets the regulations.

“At the end of the day, if they meet all the criteria of the ordinances, there’s nothing we can do about it,” Council Member Bob Anderson said.

That doesn’t mean the county doesn’t have latitude in what it approves, Person said.

“This isn’t a rubber-stamp process, and it shouldn’t be,” she said.

Keep It Green has opposed several zoning changes that increased residential density. It filed suit against the county in January over a rezoning for a tract off Highway 17 near Waterford Heights. That case is still pending.

For the Nesbit properties, “we’re not challenging the use. General residential allows townhouses,” Person said.

However, Keep It Green disputes the number of townhouses, pointing out that the county’s future land-use plan shows both tracts as “medium density,” which is between two and five units an acre. The plans up for review have densities of 9.8 and 8.6 units an acre.

In its pending suit against the county, Keep It Green argues, in part, that the zoning change from half-acre to quarter-acre lots violated the goal of the land-use element of the county’s comprehensive plan, which says the county “should limit the number of new residential units that are added” in the area.

A series of county attorneys has argued that the comprehensive plan is a guide, not the law.

Since there aren’t any appellate court decisions on the issue, Person said Keep It Green is ready to go to court on that issue.

Although townhouses are allowed on the two tracts, “it doesn’t automatically mean you get the maximum,” she said.

Area residents also object to the plans.  They don’t object to townhouses but think they should be affordable, said Vincent Davis, president of the Pawleys Island Civic Club.

“We are aware that there is a need for homes for our police officers and teachers,” he said. “We have to stand against this development because it doesn’t offer any of those things.”

Person said there are also design issues that should prompt the county to withhold approval.

The commission meets at 5:30 p.m. in the county courthouse.